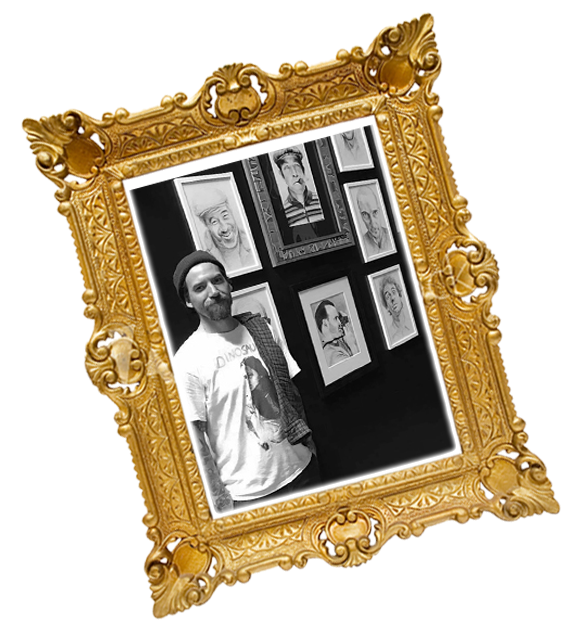 Paul Kobriger is a ballpoint pen artist living in Escondido, CA with his wife and three children. He grew up skateboarding and drawing in a small town in Wisconsin before moving to San Diego for sunnier skies and maybe a job at a skate shop. His drawing took a backseat for nearly 20 years as he pursued a career in skateboarding that ultimately led him to the Marketing Director position at TransWorld SKATEboarding Magazine. Inspired by the talents of his new coworkers and friends – writers, photographers, designers – Paul decided it was high time to dust off the pen and pad and see if he could still do it. At age 39, after 20 years of not creating a single art piece, Paul rediscovered his talent and love of drawing and has been doing it consistently for the past 2 years. His favorite medium is ballpoint pen and his works, mostly portraits, are primarily divided into 2 unique styles – stipples and scribbles. The stipple pieces are hyperrealistic drawings made up of millions of dots and take upward of 3 months to complete, while the scribbles are much looser and far less time-consuming. Paul also enjoys dabbling in woodworking and makes custom handmade frames for his prints out of the used (or sometimes new) skateboard decks for the legendary skateboarders he draws.