You can read about some of Soma’s notorious exploits in New York Times Best Seller “The Hepatitis Bathtub”. Soma has gotten sober since the mischief documented in “Hepatitis Bathtub” and taken up a daily meditation practice, and is studying Buddhism at Against the Stream. She  trained in Internal Family Systems (IFS) with a mindfulness focus at La Maida Institute in Los Angeles and does continued personal reading on psychology, body/mind traditions. 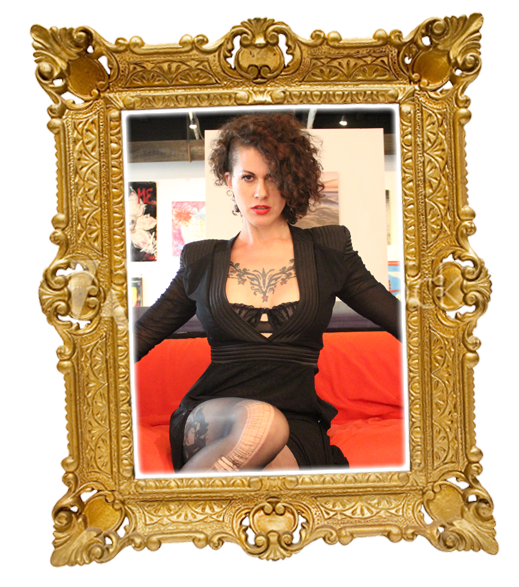 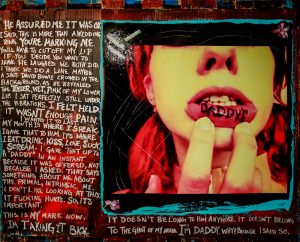 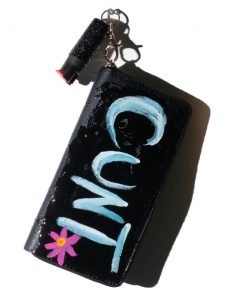 There is a tradition in marginalized groups, including in queer resistance of taking back the words or slurs that were meant to harm, demean, dehumanize or minimize. There is a power in turning those words back around and using them forcefully as a an identity or through art as an act of resistance. The purpose of the “Cunt” bag is to combine an ultra feminine item that might be used for a night out with a cocktail dress, and add teeth. Don’t step on me. The knife has a blunt end to break a window, and you never know when you’ll need to open a box or cut something. Be prepared. The pepper spray is for your protection. Walk through the world with your shoulders back, and head high. Remember, you deserve to be in any room you’re standing in. 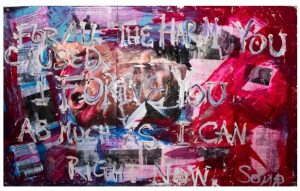 SOMA SNAKEOIL “AS MUCH AS I CAN “

In Theravada Buddhism there is a classic meditation used when meditating to create the mind conditions for forgiveness. One of the phrases that is repeated while keeping an image of someone who has wronged us is, “I forgive you as much as I can right now.” The thinking is that resentment hurts the person who holds, not the person who created the original harm. The hope is freedom. This piece was inspired by the most harmful man of our era, Trump, and the desire to be emotionally free from the suffering of his heinous reign. By attempting to forgive, through the process of art the idea would be to decrease his power. There are layers of news clippings showing his harm. Soma walked on the piece and scuffed it up with her boots before pouring resin. 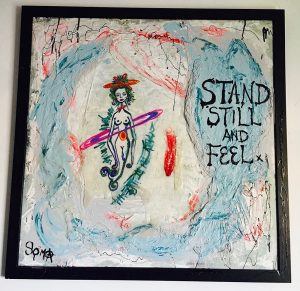 (PAINTED OVER A FLORAL PAINTING; FIRST STARTED IN THE 90’s) 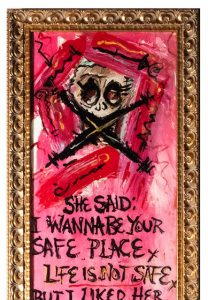 SOMA SNAKEOIL “EVERYTHING BUT THE KITCHEN SINK”

This piece was made after the end of Soma and Monique’s time together.  The words and experiences are from some of their personal moments. Soma thinks of Monique with fondness and so the piece is warm & intimate. ACRYLIC, PHOTO, RESIN ON FOUND WOOD 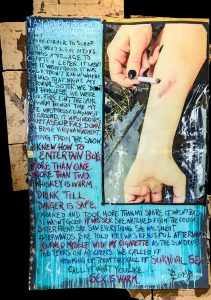 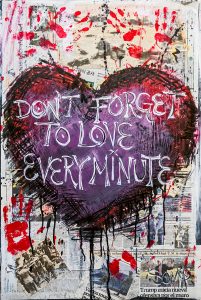 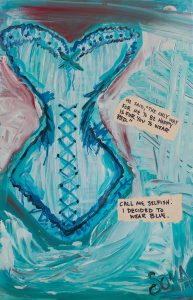 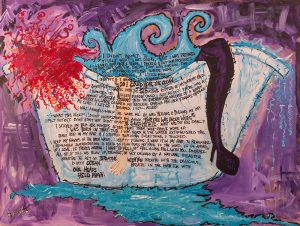